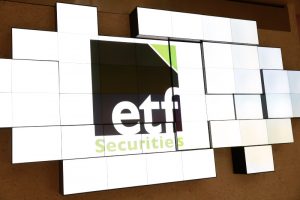 Investors’ focus remained on geopolitical risks last week, with gold and oil ETPs seeing the 7th consecutive week of inflows, as the Ukrainian-Russian conflict escalates. Russian posturing appears to be escalating and increasingly questioning Ukrainian sovereignty and the UN has urged Western nations to intervene. While oil and gold prices are yet to react to heightened risks, investors are rebuilding hedges into their portfolios.

Geopolitical risks drive the 7th consecutive week of inflows into long gold and oil ETPs. Long oil ETPs saw US$11.8mn of inflows, as the Ukrainian-Russian conflict escalates. The United Nations accused Russia of having more than 1000 regular troops in the Ukraine, pressuring Western countries to intervene. While both oil and gold prices are yet to react to heightened geopolitical risks, investors have been building positions as a hedge against further deterioration of the situation in Eastern Europe and the Middle East. Russia is the world’s 2nd biggest oil producer after Saudi Arabia, accounting for 13% of global oil output and 16% of world total exports in 2013. Should Russia ban oil exports, it is unlikely that Saudi Arabia capacity to fully compensate for the loss in production. With the EIA forecasting a 9,000 barrel a day surplus in 2014, the loss of a portion of the 10.7mn barrels a day from Russia could have a substantial impact on prices. Meanwhile, long gold ETPs saw US$13.4mn of inflows last week, as investors become increasingly defensive.

Profit taking prompts US$3.7mn of outflows from ETFS Physical Palladium (PHPD). Palladium ETPs have seen over US$100mn of outflows over the past months as fears of trade sanctions against Russia, palladium biggest producer, drove the price higher. While palladium is likely to continue being buoyed by potential supply disruptions in Russia, we believe platinum underperformance is excessive and anticipate the spread between the two metals will widen over the next few months.

ETFS Copper (COPA) sees fifth weekly inflow, totalling of US$6.9mn, as US growth picks up pace. The US Department of Commerce revised Q2 growth upwards to 4.2% from 4.0%, on stronger business spending and exports. We believe fears of copper oversupply are overblown and that copper remains attractive at current price levels. We expect investors are now beginning to focus on tightening supply-demand conditions and we expect the copper price to rebound to around US$7,500. Meanwhile, profit taking drove US$2.5mn of outflows from ETFS Aluminium (ALUM) as the price hit US$2,100 for the first time in 18 months.

Price correction drives the highest inflows since May 2014 into ETFS Soybeans (SOYB). Soybeans price tumbled to a nearly 4-year low last week, on record crop expectations from the US. About 70% of soybeans in the main growing areas were deemed in good or excellent condition as of August 24. This is the highest level seen since 1992 at this time of the year. However, early signs of Sudden Death Syndrome (SDS), a disease that contaminates the crop, showed up in the Midwest over the past week and threatens to drastically reduced yields. With soybean prices having lost over 18% since the beginning of the year, investors are starting to rebuild positions.

Bank of England, the European Central Bank and the Bank of Japan will all be holding policy meetings this week. The focus will likely be on the ECB following Draghi’s dovish speech in Jackson Hole two weeks ago. Jobs are a key concern for policymakers and US non-farm payrolls later this week are expected to show the US recovery remains robust. Manufacturing data will also be released this week for China, India, the Eurozone, the UK and the US, to gauge the relative pace of the global recovery.